Battersea Arts Centre; the phoenix from the flames… 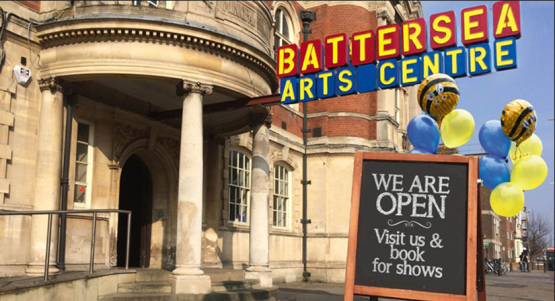 Like the proverbial phoenix from the flames, the Grand Hall has risen again, and the doors are open once more, with evidence of the blaze retained should anyone forget what happened back in 2015.

As Jubb explained in an interview with The Stage: “It wasn’t a random aesthetic decision to leave the fire-damage visible. It was much more about honouring the building and its ghosts. You get inspired by the past to think about the future. It’s key for us. We’ve always had a principle that if an artist or community group does something lovely in a space, you just leave it until someone does something better.”

Now, three years on and a lot of hard work has come to magnificent fruition and the current "Phoenix Season -- Love. Lost. Reborn." (until January 28) is a celebration of "creative risk-taking and marks a final chapter as we re-open the entire building after a 10-year renovation".

And Jubb adds: “It marked a massive moment for us – it’s the first time the entire building has been fully open for the public to explore for 12 years. When the flames rose above the Grand Hall on Friday 13 March 2015 it looked as if all that progress might be lost. But due to brilliant and brave firefighters – and the incredible generosity of more than 6,000 people and organisations -- the building was saved and the Grand Hall is reborn!”

One particularly admirable stance at the new-look BAC is the desire to embrace the local community. For instance, the Young People's programme includes "Homegrown", creative workshops programme for individuals aged 12-29, and The Agency, for local young people aged 15-25 to make their "entrepreneurial ideas a reality". Plus, Education is the award-winning BAC programme for schools, colleges and universities that connects artists with thousands of teachers, children and young people every year in a wide range of collaborative projects.

Meanwhile, the fire isn't the first time the BAC building has found path through great adversity. The former Battersea Town Hall, which was erected on Lavender Hill in 1893 by Edward Mountford, faced closure in 1965, when Battersea Borough was absorbed into Wandsworth and demolition became a very real threat.

As the excellent BAC website tells us: "Plans were drawn up by the new council to build a library and a swimming pool in its place. A local campaign was formed to save the building, resulting in a Grade II listing in 1970. In 1979, the building was saved from threatened closure again and became an independent arts centre, rather than one managed by the council."

During the building’s 127-year history, it has witnessed many ups and a few downs; today things are very much on the up!