Get ready for a Royal Night Out in Battersea Park 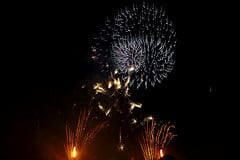 Tickets are still available for this year’s annual fireworks display in Battersea Park.

The event on Saturday 7 November will have a Royal Night Out theme after Battersea Park provided the setting for a film of the same name.

In addition to the display created by award-winning pyro-technicians Jubilee Fireworks on Saturday, the traditionally large crowd will be entertained by music and laser effects.

Organisers add that there will be more food stalls than ever, including three bars.

Wandsworth Council is urging people to buy their tickets as quickly as possible.

Until 7 November, tickets cost £8 and are available from Ticketmaster or in person from the Millennium Arena in Battersea Park.

All tickets must be bought in advance to the evening, but anybody leaving it until Saturday will be charged £10. There is, however, no charge for children aged under 10 but they still require a free ticket.

The organisers add that four entrances around the park will be open on the evening. Gates, bars and the food court opens at 6pm with the firework display starting at 8pm. There will be no admission to Battersea Park after 8pm.