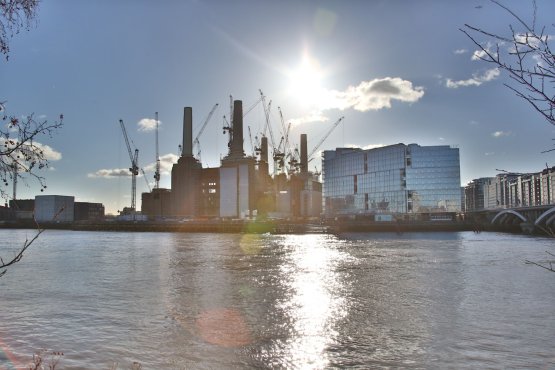 While the bickering may not reach Brexit proportions, those who are following the Battersea Power Station "green bridge" developments closely are in for a long, protracted affair before any water is crossed. That is for certain.

The first shots have already been fired in the war of words over a controversial proposal to connect BPS to the north bank of the River Thames by a £40million structure which will be open to pedestrians and cyclists.

According to design plans commissioned by Wandsworth council, the best place for a crossing is between Nine Elms and Pimlico where a £9billion development (4,000 new homes being erected and also the site for the home of Apple’s new capital HQ) is taking shape.

And, much like the ongoing Brexit wrangling (though obviously not as poisonous or anywhere near as significant!), the arguments for and against will likely rumble on and on. The latest development in the process comes more than three years after the design, created by a Danish firm of architects, was picked by the Conservative-run authority. And this came a further six years after the original plan for the bridge was first published.

Observations from interested parties sum up the split on whether or not the bridge will be a worthwhile project. One campaigner said: "The bridge will do nothing for Pimlico — apart from making it easier to walk to the new Waitrose.” Westminster council said residents "strongly oppose" the plans.

Nine potential locations were originally identified but this was whittled down to a shortlist of three last October. One of the possible locations — linking Pimlico Gardens to Bourne Valley Wharf — stirred up protest from residents close to the proposed landing point on the north bank who said it would “eat into green space” in Pimlico.

And a council spokesperson explained: “We’ve only just received a letter from Wandsworth Council confirming their proposals for a bridge from Nine Elms to Pimlico.

“At this stage we’ve seen no clear evidence of the benefits of such a bridge at this location given the costs, nor any details on how the plans would mitigate the negative impacts on local roads and environment in both boroughs.

“It’s disappointing that Wandsworth has failed to listen to the residents of Westminster who strongly oppose these plans.”

But others argue the bridge can be hugely positive and that the Battersea Power Station link could improve accessibility and connectivity to Nine Elms, including public transport routes, and had the strongest public support of the three options.

It is thought that by 2030, about 20,000 homes and 25,000 jobs are set to be created in the Nine Elms area. Robin Snell of consultants Robin Snell and Partners, who are the company that led the selection process, said: “If approved by the scrutiny committee, we look forward to progressing to the next stage of the design process, continuing to talk to Londoners about our plans and helping deliver what will be a landmark new bridge for London.”

*Transport for London first identified the need for a crossing closed to traffic across the Thames between Vauxhall and Chelsea Bridges in 2013. The Mayor’s transport strategy aims for 80 per cent of all trips in London to be made on foot, by cycle or by public transport by 2041.